Born in January 1923 in Chebukwa village of Western Kenya, His Eminence Michael Otunga, the son of African chief, was the first Bukusu priest to be ordained on 3rd October 1950. Cardinal Otunga wanted to be what he terms “ an ordinary Priest” but he found himself being made the first bishop, archbishop and Cardinal in Kenya in rapid succession.

In 1962, Otunga was among the few African Bishops who had the privilege and opportunity to attend the Vatican II council in Rome. Twice he was at the conclave in Vatican’s Sistine chapel in Rome, at the election of Pope John Paul I and Pope John Paul II.

Upon the appointment of Bishop Ndingi Mwana ‘a Nzeki as the Archbishop of Nairobi, Cardinal Otunga gracefully stepped down from active ministry and his office.

He retired to Nyumba ya Wazee where he happily spends his time in prayer, reading and ministering to elderly people.

CREATING A SOCIETY CARDINAL OTUNGA WOULD HAVE LOVED

It is Maurice Michael Cardinal Otunga’s dedication to serving all God’s people that led the Catholic Church to commence the process of his canonisation. I want to join the Catholic faithful in celebrating the declaration of Otunga as the ‘Servant of God’, which is the first critical stage in the process of beatification.

I am confident that the second stage, which involves looking at his life, including writings by and about him, will be successful, too. 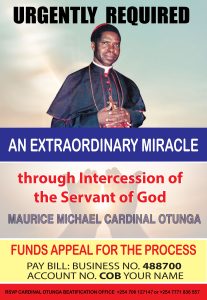